Your browser is not supported. Please consider using a newer browser.
Close 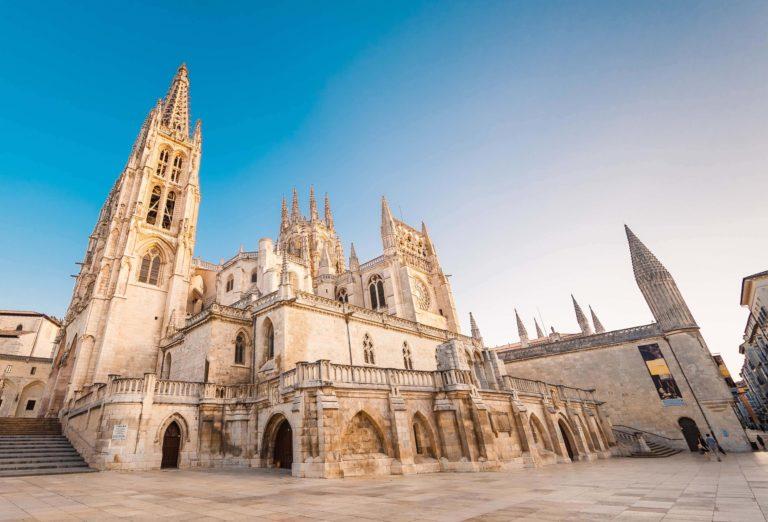 The Cathedral is the main monument of the city. It is considered to be one of the most spectacular examples of European Gothic art, it was designated a UNESCO World Heritage Site in 1984.

Who doesn’t identify Burgos with the spires of its cathedral? These spires distinguish this temple from other cathedrals because of their slenderness, these elements are two jewels that were designed by Juan de Colonia in the 15th century. If you want to discover this building and admire its façades, you should walk its perimeter that goes around plaza de Santa María, Calle de Fernán González, Llana de Afuera and plaza del Rey San Fernando.

It was built in 1221, following the French gothic patterns. At the beginning, the temple had a Latin cross layout with three naves, a marked transept and an ambulatory at the apse. To this original early thirteenth-century Gothic design, a series of funerary chapels, financed by clergy and nobles, were gradually added.

The inside of the cathedral needs an in-depth visit , but if you don’t have enough time, there are many treasures that you should not miss: the chapel of los Condestables, which is considered a cathedral itself, designed by Simón de Colonia; the elegant Golden Staircase, inspired by the Italian Renaissance; the Chapel of Santa Ana, whose altarpiece is a masterpiece of the late gothic European sculpture; or the tomb of El Cid and his wife Jemena, which is found in the central nave, at the foot of the spectacular lantern tower.

One of the most popular attractions, especially for children, is the Papamoscas (flycatcher) clock, a strange automaton that chimes every hour whilst it opens its mouth.

Did you know… In 2021 the cathedral will celebrate its 800th birthday, all the cultural and commemorative events surrounding this celebration can be found at the website: