Your browser is not supported. Please consider using a newer browser.
Close

Burgos is one of the most important landmarks to understand el Camino de Santiago and its route though the Iberian Peninsula. Being crossed by this pilgrimage route had a crucial impact on the history and the urban development of the city for centuries. Every religious institution, including the Cathedral, revolved around the pilgrims. In addition, its 35 hospitals made Burgos the most hospitable city in Europe. Without the need to continue on to Santiago, you can do one of the most interesting urban sections of the entire Jacobean route in Burgos.

The best place to start is Plaza San Juan, a large urban space which is home to the Monastery of San Juan, San Juan Hospital, which now is the main public library, and the beautiful church of San Lesmes, the patron saint of Burgos, that represents a notable example of the late 19th century local Gothic architecture.

After crossing the medieval bridge over river Vena, the gate of San Juan enables you to head along the entire length of the street of the same name. Following the Jacobean shells that signpost the correct route, we will pass very close to the Baroque Church of San Lorenzo, which gives its name to one of the gastronomic streets of the historic quarter. The Captaincy Palace which is now the Historic Military Museum is very nearby.

Along Avellanos street, dominated by the traditional white painted, wood glazed balconies, we reach San Gil street, which leads to San Gil Church on the right hand side. On that same street, on the left, there is the Plaza de Huerto del Rey, commonly known as La Flora, due to the presence of a statue of this pagan goddess that dominates, from the top of its fountain, this extended urban space. The unique view of the Cathedral that can be enjoyed from this place is of particular interest.

Leaving behind the Cathedral and the church of San Nicolas, the Camino de Santiago passes near to the arch of Fernán González, the monument to “El Empecinado” a famous guerrilla fighter during the Spanish independence war and the Site of El Cid, to reach the Mudejar arch of San Martin, from where the visitor can leave the old town and the fortified precinct.

Though the streets “Emperador” and “Villalón” the visitor can descend until the bridge of Malatos, that crosses the Arlanzón river. In the leafy park of El Parral it’s easy to find the Chapel of San Amaro and the Hospital del Rey, with its characteristic Renaissance facades, that hosts many departments from the University of Burgos.

This Jacobean church is dedicated to the patron saint of Burgos, San Lesmes. It was rebuilt during the 15th century and has an ogival façade by Simon de Colonia. It has 3 naves with a transept and plateresque choir. It preserves variousBaroque altarpieces, the 14th century Holy Cross altarpiece and fine Renaissance sepulchres.

In the middle of the church the tomb of San Lesmescan be found, with a reclining statue.

Despite being surrounded by the wall and theunderstated appearance of its facades, this church possesses an exquisite artistic refinement. A series of funerary chapels funded by rich merchants are connected to the main 3 naves and transept. But the main treasure of this temple is the chapel of la Natividadbuilt in the middle of the 16thcentury by Juan de Matienzo and, as well as being covered by a spectacular octagonal star-shaped dome, itboasts a beautiful altarpiece by Felipe de Vigarny. 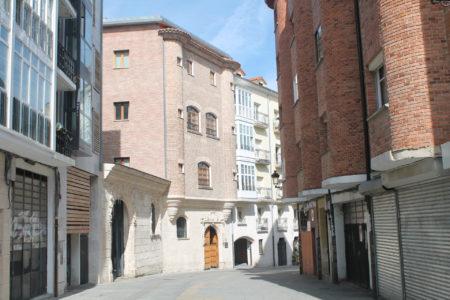 In the old Calle Real, on the Camino de Santiago, many interesting Renaissance buildings were built, reflecting the prosperity of many important merchant and noble families. One of this buildings is the palace called “Casa del Cubo”, and the “Casa de los Lerma” right next to the other palace.

Nowadays this palace is the Municipal Pilgrim Hostel.